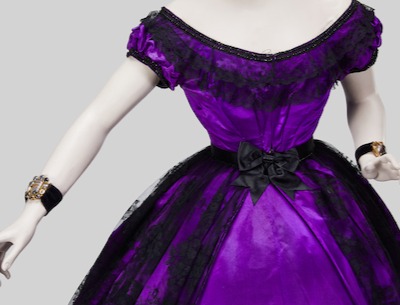 Exhibition will be dedicated to the mid-1800s fashion.
In the 19th century Europe was changing at a rapid pace – cities and towns grew, communication between them was provided by expanding railways along with the mail coaches used until then. In many places the narrow streets so common in the Middles Ages were replaced by wide and straight avenues, gardens and parks were designed and created in cities and towns. Population of cities and towns grew due to influx from the country. People worked at countless factories, whose chimneys became an intrinsic part of the landscape.

It was a world invented and built by men: cast iron, steel, steam locomotives and steam ships, impressive buildings, central heating, water pipes and sewage systems at homes, the unusually bright light of gas lamps along with new workshops, banks, trade, politics – were all in the male domain. The men wore elegantly demure clothing in dark colours, conducted business, founded enterprises and visited gentlemen's clubs. Women in dresses from fabrics dyed using the new bright aniline dyes were like bright flowers or exotic butterflies set against the bleak landscape of cities shaded by the smog.

In 50s and 60s of the 19th century the social role of women was insignificant, but women's dresses had never taken up more space. A construction made of steel hoops similar to a bird cage – the crinoline – became popular. It replaced numerous layers of petticoats worn during the previous decades. The crinoline could reach a circumference of up to five metres at the bottom. Architects were required to take into consideration the considerable size of ladies' dresses as they designed gardens that gradually came into fashion.

At that time a woman in addition to being an exemplary wife and a mother, was also required to become an adornment of the sitting room or a box at the theatre, which meant multiple change of clothing during the day and strict adherence to etiquette and social norms. Maintaining a respectable public image required considerable financial means, therefore ladies in splendid, costly attires often were indicators of their husbands' status and wealth. Enormous expenses on dresses were not only considered justified, but even necessary.

The exhibition includes splendid 19th century dresses from Alexandre Vassiliev's collection. Such dresses reflect the wardrobe of a wealthy woman of that period. Items are exhibited in accordance with the daily routine – from the moment the woman makes herself presentable after waking up to social visits, travel, walks and evening balls or entertainment. Tailcoats, waistcoats and top hats worn by men at the time are also exhibited. The exhibition includes refined accessories, jewellery and objects of interior that supplement dresses.